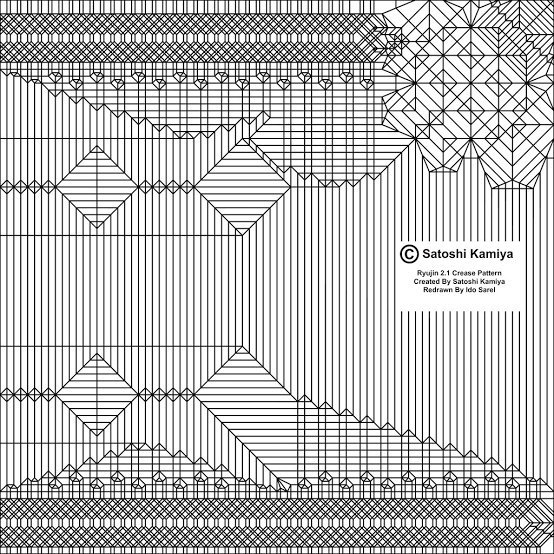 These include large pictures, plain-paper origami diagrams (Gakusei), hand-drawn paper-model 3D views (origami kamishibai), the various types of diagrams that are usually prepared for presentations of new models, and the diagrams that show the results of folding analyses on a model.
Ryujin 1.0-2.0 COMPLETE MATERIALS – Andrew Horner.pdf – Free download as PDF File (.pdf) or read online for free. Listing of all new published works. Here are ready-to-fold models that could be folded even with the regular paper.

You can download a file that makes it possible to unfold (rotate) a model in the same way as folding a book. This is of course not a new technique and can be used in several situations, but here is an illustration of what can be done in this way.

The next page shows a fold pattern that is not typical for origami but that shows the power of using a cardboard model.

The fold pattern shown below can be used to make an origami tent as illustrated in the picture below. You can see a detailed example of this fold pattern on this website.

A fold pattern that is made by using a cardboard model and a glue-less technique is shown below.

Also an example of this technique is shown in this picture.

A fold pattern that requires the preparation of a glue-less technique is shown below.

A fold pattern that is made with a fold line is shown below.

An origami model folded by using the fold pattern shown below is shown below.

The fold pattern shown below can be used to make an origami tent as illustrated in the picture below. You can see a detailed example of this fold pattern on this website.

Ryujin kyudo origami. Satoshi Kamiya Ryujin. 2.6 Grids The grids for Ryujin are a bit different. We choose 16 as a middle. In a later paper Kamiya uses the tetragonal coordinates.

I’m using react-redux-apollo, and get Uncaught TypeError: res.data is undefined
I have done the same on my github project, it works fine, but when I do the same in another project I get the error above.
It seems like the issue is with my apollo library, but I can’t figure it out.
I also tried to use apolloClient instead of apolloClientFactory.

The problem is that when you get an error, the getError function is called, and in this case, you are accessing the first argument (res) before it has returned the error.
Try changing your component to this.
import { getError } from ‘apollo-client’

Also, check if the path to your query matches exactly to the path of the error.